East River Intercontinental Airport is a large intercontinental public airport located primarily in the ‘Blackslough’ region of central Sansara. The facility also overlaps the neighboring ‘Pippen’ region where a terminal entrance is located.

A massive, multi-leveled terminal spans the northern edge of the complex, with several arrival/departure gates and a dedicated gate A4 linking the airport with White Star Airfield on Nautilus via an airline ticket HUD and teleporter. The terminal is equipped with three jet bridges, lounges, monorail terminal, restaurants, ticket counters, and baggage reclaim.

Vulture Air has a long-term lease on Hangar One with an FBO and office as well as a GridEx office. Inside the terminal, we operate a check-in desk as well. 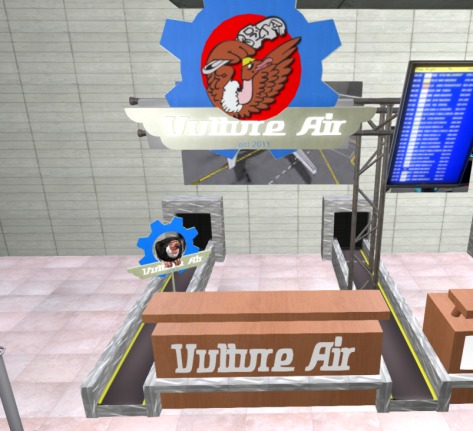