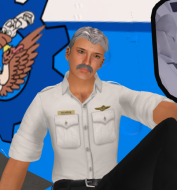 Dave Gaffer is the Founder of Vulture Air. He originally started in 2011 with a simple bush plane, a DHC-2 Turbo Beaver, at Shepard’s Point Airfield.

Later, a Dash R300 commuter jet and an A109 executive helicopter were added to the fleet. A second location opened on the Blake Sea at the former Prague Airport. The airline headquarters moved to New Horizons and it was only a matter of time until Vulture Air grew to become the one of the largest and more active passenger airlines on the Second Life® Grid.

Dave retired from the United States Navy of SL as a Commander. He served as Commanding Officer of the Naval Service Training Command and as a MH-60 Knighthawk helicopter pilot during the Undine Conflict.

Though Dave is still an avid helicopter pilot. He is currently the Chairman of the Vulture Group, the holding company that owns Vulture Air. He also manages Vulture Logistics, the ground and ocean shipping division The Vulture Group.